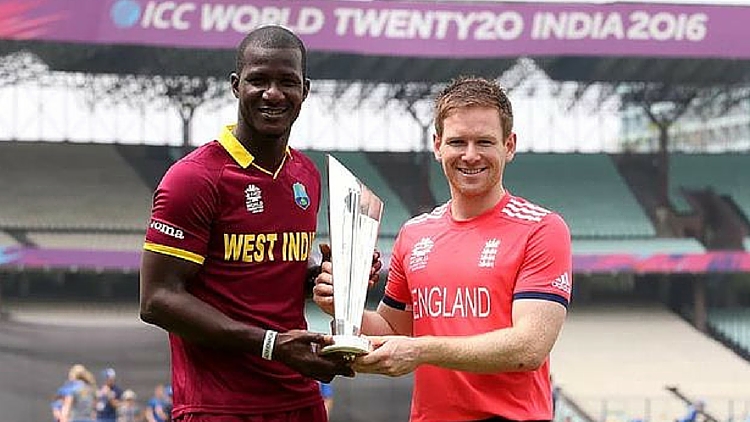 England and West Indies are equally enthusiastic as they’re set to play against each other in Kolkata, in ICC World Twenty20 final on Sunday 4th April at 7 PM. England’s men reached the final with a brilliant match win over New Zealand on last Wednesday, whereas West Indies sealed their finale spot on Thursday with a striking victory over host India.

Just like every other World Cup, this year’s edition of ICC World Twenty20 championship has given its viewers few unforgettable on-field moments which will remain in the minds of the fans forever. It showcased some amazing performances, perfect celebrations, and sights of celebrities cheering for team India.

This tournament has certainly been a visual delight with 10 many countries playing against each other.

England reaches final, beating New Zealand by seven wickets in Semi-Final 1 on 30th March. All thanks to Jason Roy who was England’s batting hero by scoring 78 runs. He was declared Man of the Match!

Cheers to England team to be in finals!

In the Semi-Final 2 held on 31st March, West Indies beat India by 7 wickets to enter into finals of ICC World Twenty20!

WI (196/3 in 19.4 overs) won against India (192/2 in 20 overs) in order to fight with England in Finals. They really played superbly to make their place in finals. Though India too batted amazingly with a big score, but because of no balls and dew on field, they couldn’t succeed to win this time.

Lendl Simmons became the Man of the Match!

Kolkatta audiences will be excited to see 2 big teams, England and West Indies fighting for victory. England is anticipating that their strong batsman, Morgan, having two golden ducks, returns to form in final, and Windies too are having similar anticipation from Marlon Samuels, their powerful batsman who hit match-winning 78 runs in 2012 final against Sri Lanka. Windies also have the biggest support system with wig-hitting and most-sought T20 cricketer Chris Gayle taking the lead charge, and of course Lendl Simmons who gave his striking performance against India on Thursday.

As both team’s batsmen, bowlers and fielders are remarkable, every player will showcase their talent on the field to topple the opponent team. Whichever team bats first will try to put a huge score that may become difficult for the other team to chase. So both England and WI have to give their outstanding performance for winning the World Twenty20 trophy!

Watch out the final match of ICC World Twenty20 – England Vs West Indies on Star Sports channel, and ‘HotStar‘ Sports at 7 PM! All the best to both teams. We’ll update the winner team later. Stay tuned!