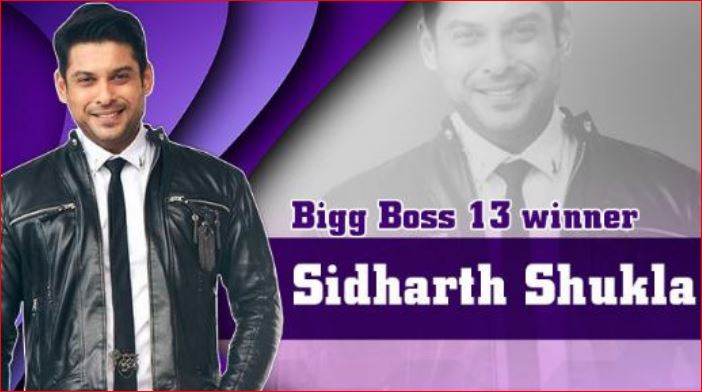 Bigg Boss 13 this time extended to four months fifteen days, entertaining the audiences and gaining TRPs. Hosted by Salman Khan, the Bigg Boss – Hindi Season 13 which had 22 housemates, 139 episodes and 140 days garnered a good lot of interest among people, though it might have caught up with critics and controversial comments. Sidharth Shukla, Asim Riaz, Paras Chhabra, Rashami Desai, Aarti Singh, and Shehnaz Gill were this season’s finalists.

Paras Chhabra was the first of the six finalists to be eliminated. He took away Rs 10 lakh and quit the show in between as every year this is Bigg Boss’s plans. Aarti Singh was the second one to leave the house, followed by Rashami Desai. Shehnaz, Asim and Sidharth made it to the top three.

Among Asim Riaz and Sidharth Shukla being the top two remaining in BB house, Salman Khan announced Sidharth as the winner. Though the voting continued for last week, still voting lines were declared open for 15-minutes for audience voting to login to the Voot app to give votes to their favorite contestant.

After facing a roller-coaster ride of countless tasks, extreme challenges and staying away from all the luxuries for 140 days, Sidharth Shukla emerged as the winner of the Bigg Boss 13 finale and took home the Bigg Boss 13 trophy.

@realsidharthshukla As they say, all's well that ends well! And it definitely is more than well when you wake up to finally see your longstanding dream being fulfilled! Which we are sure has been truly satisfying for everybody who has been a part of #Sidhearts as well as all those lovely well-wishers who have supported him throughout! So now lets all of us happily celebrate a great victory and happy ending for the show that made our boy truly stand out! . . #TeamSidharthShukla #SidharthShukla #RealSid

Asim, Sana, Rashami and Aarti, the 4 runners-up, have won themselves tickets to Yas Island in Abu Dhabi, as announced by the Salman Khan. This time Bigg Boss gifted the runners-up contestants.

Comedian and Salman Khan’s Bharat co-star Sunil Grover took over the stage and amused all the contestants with his funny gag. His impressive mimicry of Amitabh Bachchan deserved a special mention. Sunil’s act cracked up all the contestants.

#Repost @colorscineplex with @make_repost ・・・ Get ready for a legendary night! Watch @mohammadkaif87 and @harbhajan3 at the #BiggBoss13 grand finale alongside 'Bhai' – @beingsalmankhan and raising their support for #RSWSeries starting from 7th March only on #ColorsCineplex. Let us know your prediction on the winner in a comment box below. 😍 #YehJungHaiLegendary @rsworldseries

Shehnaz Gill and Paras Chhabra might not have won the show, but they will soon participate in a new show titled Mujhse Shaadi Karoge, in which they will find suitors for themselves.

As Salman Khan said before the controversial reality show’s end, Colors‘ Bigg Boss will come soon with its 14th season after 7-months; with its special dialogue: “Do whatever you want, but don’t trouble your mother.”