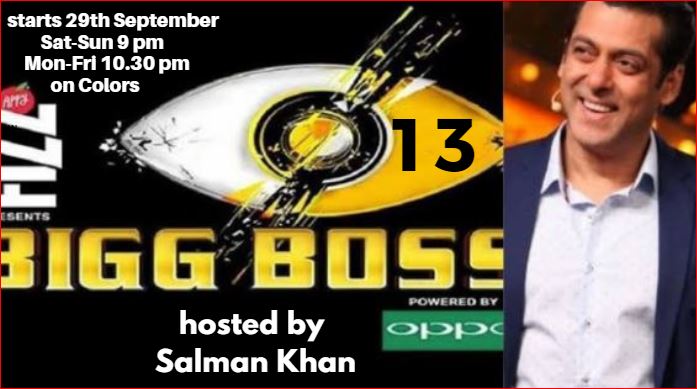 The most controversial reality TV show titled Bigg Boss is back again with its 13th season on Colors channel with its thirteen contestants. This time too Salman Khan is hosting the show on the weekends. For all those who are enthusiastically waiting for the reality show arrival and fans of Salman Khan can rejoice as Bigg Boss (Hindi) is beginning its journey from September 29, Sunday, 9 pm onward. The weekday episodes [Monday to Friday] will be telecast at 10.30 pm from September 30, Monday. Weekend episodes [Saturday-Sunday] with Salman Khan will be aired at 9 pm.

Bigg Boss is geared up with crazy manoranjan for its audiences. The 13th installment of the popular reality show will see many changes being made by the makers in order to add more spice, color, and entertainment for the people.

The Dabangg star who is returning as a host in Bigg Boss for the tenth consecutive time has promised audiences absolute entertainment in the 13th season and at the same time, he is excited too to join the show. Salman makes his grand entry dancing on his song ‘Slow Motion’.

Salman also reminded that the finale of BB13 will happen in just four weeks of their stay but the contestants would continue to be in the race for the trophy for the next two months. This might signify that more evictions will happen in the first month than the next two months. Bigg Boss show would most probably then move on to its next stage where the remaining contestants would be grilled to the core for their survival in the house with a variety of tasks that would test their patience level.

Reflecting that the show every year gets interesting towards the last 2-3 finale weeks, it seems like a fine idea for the makers to stretch it to two months. Thus, the Bigg Boss 13 would wrap up by December end.

Colors channel have already introduced three promos, first with Salman Khan in gym with Surbhi Jyoti and Karan Wahi; second, Salman as station master; third, in a house with watch wall background and sand game, and fourth, Salman as a chef cooking khichdi in the kitchen, along with his announcement that finale will happen in the fourth week, followed by remaining celebrity contestants spreading raita and tadka in the show.

Colors captioned the promo as: “Get ready to hop on to the #BB13 entertainment express along with @vivo_india ek dum fatafat! #BiggBoss13 Coming soon! @beingsalmankhan.” Salman also adds that Yeh season hai mera, bohot hi tedha (This season is mine and quite twisted).”

TV actress Dalljiet Kaur was last seen on Zee TV’s Guddan Tumse Na Ho Payega and Hiawan. She is heard to make her entry in Bigg Boss 13, leaving her son and stay at BB house.

Known for her stint in Uttaran as Tapasya Rathore and Dil Se Dil Tak on Colors, Rashmi Desai is likely to enter the Big Boss house and create some tahalka. She was last seen on Kitchen Champion 5 as a contestant and Khatra Khatra Khatra as a guest (Colors). She has earlier made a guest appearance in Bigg Boss 6 and 10 as a guest on the finale to promote the show.

Aarti Singh, sister of comedian Krushna Abhishek, was last seen in shows like Maayka, Udaan, and Waaris. She has decided to enter the Bigg Boss 13 house.

Paras Chhabra was last seen in MTV Splitsvilla 5 as a contestant and won the show, and again he entered season 8 of Splitsvilla as a celebrity contestant. He has always been in news because of his relationships. He might create steer inside the Bigg Boss house.

TV actor Siddharth Shukla was last seen on Colors’ Dil Se Dil Tak show as Parth Bhanushali and he even acted in the movie titled Humpty Sharma Ki Dulhania as Angad. The muscled man Siddharth is entering the Bigg Boss 13, increasing the heartbeat of girls.

Mahika Sharma is a TV actress, TikTok star, Instagram star and model. She was last seen in TV series, Kundali Bhagya, Naagin 3, and  Y.A.R.O. Ka Tashan. She has made her entry in Bigg Boss 13.

Popularly known as Gopi Bahu from Saath Nibhana Sathiya on Star Plus, Devolina Bhattacharjee is participating in Bigg Boss 13 house as a contestant.

Koena Mitra, Indian actress, and model have acted in a few Bollywood, Bengali and Tamil movies. She became famous with her item number song, “Saaki Saaki” from Musafir and “Khullam Khulla” from Road. She is going to enter the house of Bigg Boss 13.

Shehnaaz Gill from Chandigarh is a Punjabi model, and actor, and also a singer. She has grown popular from her Punjabi music video song ‘Majhe Di Jatti’ sung by Kanwar Chahal. She has entered the Bigg Boss house.

Shefali Bagga has worked with a Hindi news channel, Aaj Tak as a reporter, and earlier worked as a journalist and anchor with Tez channel of TV Today Network Ltd. [India Today Group]. She is currently appearing in Bigg Boss 13.

Siddharth Dey is a writer and publisher by profession. He has worked with leading Bollywood Stars, now seen in Bigg Boss 13 house.

Asim Riaz has worked as a model for the B’lue, Blackberrys, Numero Uno companies, etc. Now he has entered Bigg Boss as a contestant.

Abu Malik is a known Indian composer and musician who sings and composes music for Bollywood movies.

Ameesha Patel as Maalkin of the Bigg Boss House

Indian actress and model Ameesha Patel who acted in Bollywood movie Kaho na..Pyaar Hai, Humraaz, and few other Hindi, Telugu and Tamil films, appears in Bigg Boss 13, not as a contestant, but as a Maalkin of the House. She is probably going to stay in the secret room of Bigg Boss to oversee the developments happening in the house. She will also appear in the house in between to assign tasks to the housemates. It would fun to see how well the contestants fulfill the tasks, especially to get their weekly ration and also complete luxury budget tasks.

All the Bigg Boss lovers, catch up for the exciting drama, entertainment, fun, games and many more from 29th September, which will continue till December-end! Stay tuned for the latest updates of the BB house!