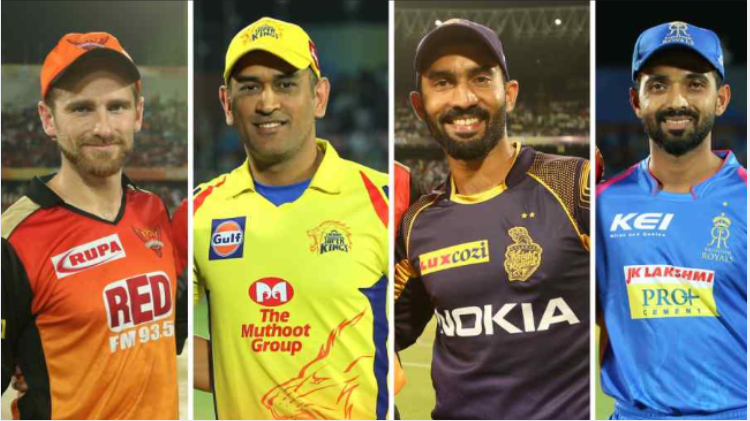 The grand Indian Premier League which began on April 7 will wrap up Season 11 by May 27. The top qualifying teams are set for four play-off matches. Sunrisers Hyderabad 1st and Chennai Super Kings 2nd already made their places intact at Quarters. Kolkata Knight Riders took the third spot Quarters on 19th May, whereas Rajasthan Royals sealed the fourth and last seat for Quarters on 20th May. So, the line-up for the playoffs includes SRH at the top, followed by CSK, KKR and lastly RR who moved ahead of league stage successfully.

Sunrisers Hyderabad takes on Chennai Super Kings in Qualifier 1 at Wankhede Stadium on Tuesday, May 22. The team that wins will go straight to the finals.

Then with a daybreak, winner of Eliminator will play against the loser of Qualifier 1 on Friday, May 25. Hence, the winner of Qualifier 1 will play against the winner of Qualifier 2 on Sunday, May 27, the final day. The remaining three matches will showcase high-voltage performances and a tight fight in order to reach the top 2 spots for finals. Unfortunately, Mumbai Indians, Royal Challengers Bangalore, Kings XI Punjab and Delhi Daredevils had to back out from the competition after playing the compulsory 14-matches each, yet not proving themselves to qualify.

Check out below the Play-Offs Schedule:

The Top 4 Teams in the Play-Offs

Out of 14 matches in the league, Sunrisers Hyderabad won 9 matches and lost 5 with run-rate +0.284; hence their points are 18 and first to qualify for playoffs when they won against Delhi Daredevils by 7 wickets. The team has been experimenting with their players. On winning the toss, they have sometimes batted later and sometimes fielded first. Even though in some matches Hyderabad scored less score in the first half, still they managed to win against their competitor because of having excellent bowling and fielding. They have been surprising their fans throughout the tournament.

Chennai Super Kings won 9 matches and lost 5 from 14 matches with run-rate +0.253. Thus, their points are 18 and second to qualify for playoffs when they beat SRH on May 13 by 8 wickets. After a gap of two years, this time Dhoni’s CSK are back in action from their very first match. They have won the first few matches exhibiting their high scores above 200 par excellence. Though they lost the latter matches but ended the last league match against Kings XI Punjab superbly, beating them by 5 wickets.

Kolkata Knight Riders scored 16 points, winning 8 matches and losing 8 matches. Their run-rate is -0.070 making them stand at rank 3 qualifier. KKR won against SRH on May 19 by 5 wickets to enter the 3rd spot. Overall, KKR too is a good team and are capable of scoring high runs.

Royal Challengers managed to score 14 points from 14 matches, winning 7 and losing 7, with run-rate -0.0250. RR won against RCB by 30 runs on May 19. Though they were placed at No 4 but not declared qualified for the playoffs, because Mumbai Indians too had a chance to qualify and so as Kings XI Punjab. Once MI lost against DD on May 20 by 11 runs, they lost the chance too to qualify this time. Also, KIXP had to score an additional 53-runs and win against CSK, which they failed. As per the run-rates, Rajasthan Royals sealed their seat for the qualifier at No 4.

Hence, those who are interested to watch live in stadiums can buy tickets from BookMyShow! Rest can watch out for the exciting IPL Season 11 Qualifier 1, Eliminator, Qualifier 2 and Final matches from 7 pm onward, on Star Sports and Star Sports HD (Hindi and English) [television] and also on Hotstar Premium. Also, visit IPLT20 to get the latest updates and videos! Stay updated!

A Small Note on IPL Glamor:

Every owner and co-owner want that their individual teams win the maximum matches to set their feet towards Playoffs from League matches and win the marvelous cup of that season. So it’s the responsibility of the eight captains and every selected player in this IPL that their teams including Sunrisers Hyderabad, Chennai Super Kings, Kolkata Knight Riders, Rajasthan Royals, Mumbai Indians, Royal Challengers Bangalore, Kings XI Punjab, and Delhi Daredevils should give the best performances in every match. If the team loses any match, the owners and the co-owners of that team have to bear the loss.

For example, one incident happened on May 11 when Co-owner of Kings XI Punjab, Preity Zinta got angry on mentor Virendra Sehwag, as her Punjab team lost the last match against Kolkata Knight Riders. Sehwag thus conveyed back that he won’t be a mentor of the team anymore, as she disrespected the legend in front of other staffs. The reason behind Preity upset and nervous is that she has invested crores of rupees behind her franchise. When a team doesn’t win a match, crores of rupees goes in the water. Though they win and again crore of rupees comes in too. Hence, this game of IPL proves that money is important and hugely valuable too. Money comes first, respect later. In the end, IPL wins but few human players loss their dignity somewhere in that season.

Well, a loyal Mumbai Indian supporter, Akhilesh Sharma shared his thoughts on this matter, saying, that due to continuously players being involved in the game, the fitness of the players is being questioned. The number of injuries and unfit players list are increasing gradually, due to which they are declared as unfit for the National team. Thus, IPL has certainly grabbed all the charm. National players like to play premier league, instead of playing for the nation. Also, the young newcomers and other talented players try their level best to excel in every match so that they can earn their name and fame, even though they might not get a chance in the National team! Hence, besides IPL seasons winning all the credit; every players, coaches, and mentor of every team should be given equal respect throughout the season!

All the best to the four top teams, Sunrisers Hyderabad, Chennai Super Kings, Kolkata Knight Risers, and Rajasthan Royals for putting their best performances on the field for these remaining matches! Hope the best team win the IPL Season 11 Cup on Sunday, May 27! 🙂