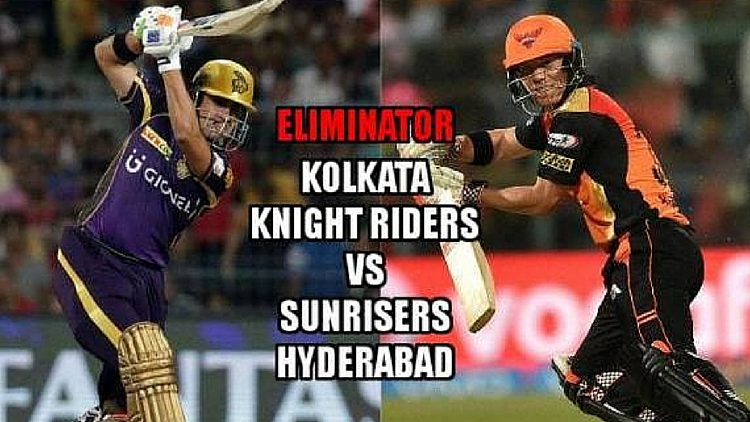 The eliminator of VIVO Season 9 IPL will be played between Sunrisers Hyderabad and Kolkata Knight Riders today 8 pm, at Feroz Shah Kotla cricket stadium, New Delhi. Both SRH and KKR will be giving each other a tough fight to secure a place in Qualifier 2. Whoever will be the winner tonight will contest against Gujarat Lions, the losing team of Qualifier 1. Thus the losing team today will be out of the game itself. In this season KKR has won two matches against SRH. So this is a great chance for SRH to take their revenge and become victorious. But on the other hand, KKR is intending for a hat-trick in the eliminator playoff.

Sunrisers Hyderabad [SRH] is ranked in the third position with 16 points. Though Kolkata Knight Riders [KKR] scored 16 points, but are placed in the fourth position as their side had lower net run rate.

The Sunrisers were not in their best forms because they lost their previous two matches against Delhi Daredevils [DD] and Kolkata Knight Riders [KKR]. Their confidence might have lessened, but they’ll come full-charged to show their winning side tonight.

In Sunrisers Hyderabad team, David Warner is an excellent captain as he is the second highest run-achiever [658 runs from 14 matches] in the tournament. After a slow start, Shikhar Dhawan, the opening partner of Warner, has brilliantly scored 463 runs, along with unbeaten 82 runs which is his highest run scoring.

The other batsmen of SRH like Yuvraj Singh, Moises Henriques, and Eoin Morgan are yet to show their fineness. Hope they showcase their bating skills in Eliminator.

Unfortunately Ashish Nehra will be absent due to his hamstring injury that he is currently facing. In his absence, Bhuvneshwar Kumar and left-arm duo Barinder Sran and Mutafizur Rahim have to show their better forms in bowling so that they can grab more number of KKR’s wickets. Though the overall team has won quite many matches earlier, still they have to give their best shot to crush KKR players and stop them from entering into Qualifier 2 match.

Coming to Kolkata Knight Riders, they have a benefit over Sunrisers as they have defeated them twice in this season. In the first time KKR beat SRH by 8 wickets, and in the second meeting, KKR won by 22-runs against SRH last Sunday for qualifying the play-offs.

Bowlers like Sunil Narine, Kuldeep Yadav, Piyush Chawla, and Shakib Al Hasan have gained wickets and helped the team to win against their opponent teams.

Hence, the team that wins tonight will have to fight with Gujarat Lions in the Qualifier 2 in order to enter the final. Royal Challengers Bangalore beat Gujarat Lions yesterday in Qualifier 1 to have a direct entry into the final.

You can watch out the crucial match between Sunrisers Hyderabad and Kolkata Knights Riders on Star Sports 1, Sony Max, and Sony Pix channels, and Hotstar at 8 pm. Hope SRH wins today’s match to play in Qualifier 1 on Friday. Get in front of your television screen to watch today’s interesting match starting sharp at 8 pm! 🙂