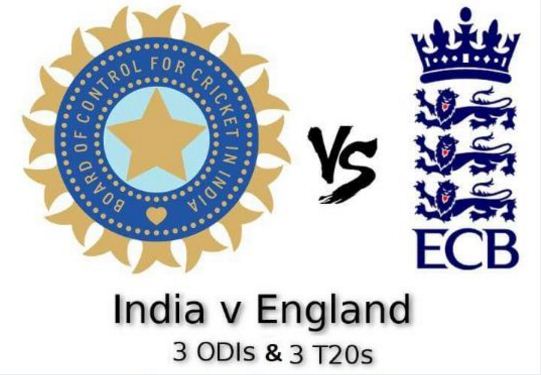 The cricketing season begins for the Indian cricketers with the approach of 2017, and Indian team will start off their ODI and T20I matches against England. In the last year the test match series was lost by England as they couldn’t beat India. After a long one-month Christmas break, England return back to India to play for three ODIs and three T20Is in six different cities, including practice matches at the start. In the test series, Virat Kohli (India) and Alastair Cook (England) were the captains. MS Dhoni is seen as a captain for the one-last time in the warm-up game played today.

From the time the ODI will start from 15th January, Virat Kohli will retain the captaincy. Eoin Morgan from England will be their captain for the upcoming matches.

The ODI series between India and England will be a limited 50-over match beginning from 10th January. Before the main ODI, England will be playing 2 practice or warm-up matches of 50 over against India A. The 1st practice match between India A vs England XI is played on 10th January. Team England needs to give their best input for these ODIs and T20s as they have before lost out the test series against India by 4-0. Indian team is definitely strong enough and with new players, they are all set to showcase their excellent performance on field and win this time too. With the 50-over day and night cricket match, India A takes on England XI first tour match, followed by India vs  England ODIs, and India vs England T20Is. The three ODIs will be day-night matches starting from 1.30 pm, whereas the three T20Is will begin at 7.00 pm.

Thus, India lead by 2-1 against England. The Indian team won the champions ODI trophy. Cheers to the whole team of India for their superb ODI win!

It was on 4th January 2017 when MS Dhoni decided to step down as Indian team’s limited overs captain and it was definitely shocking news for the whole world. His nine-year continuous reigning as a national skipper of India came to an end, but for the last time today MS Dhoni will be seen as a captain in the first warm-up game against England at Brabourne stadium in Mumbai; where captain is written against his name for the one last time.

The cricketing world was surprised on Dhoni’s steeping down from captaincy post last week, thus giving the reins to Virat Kohli to manage the team as a captain ahead. MS Dhoni was all praises for his fans who have come down to watch his last match as Indian captain. While he lost the toss against England today, Dhoni conveyed, “It’s good for them to turn up. Actually their turning up for a warm-up match itself exhibits how much they love me whole-heartedly. For someone like Yuvi (Yuvraj Singh), I did like to give him some more time with the ball.”

The 35-year old remarkable batsman and wicket-keeper earlier retired from Test cricket in December 2014. In 2007, MS Dhoni led India to the ICC World T20 title; in 2013 won the Champions trophy; during his captaincy MS also took India to No 1 ranking in Test series. He stands as the only captain in the world of cricket to win superbly each of 3 ICC trophies. Before the practice match started today, MS Dhoni was felicitated by The Cricket Club of India.

Yuvraj Singh and Ashish Nehra have been recalled for the limited-overs matches, giving them the chance to prove their level best on field. Yuvraj returns to cricket after three long years.

MS Dhoni said, “This is my last game as a captain, but I will be captaining in IPL and also may be the Jharkhand team. I thank all the fans; they have been behind me for a very long time.” He even went on to say that fitness is highly essential, especially once you get into your 30s. MS Dhoni will always be an amazing captain for India, and wish he plays many more great matches for country.

Hence, all you cricket lovers can now watch India vs England 3 ODIs and 3 T20s on Star Sports network, and Hotstar LIVE! Link: http://www.hotstar.com/sports/cricket

For the latest updates, you can download Star Sports, Hotstar and Cricbuzz apps on your smartphone and enjoy the ODI and T20I matches between India V/s England. Stay updated over here with the results!