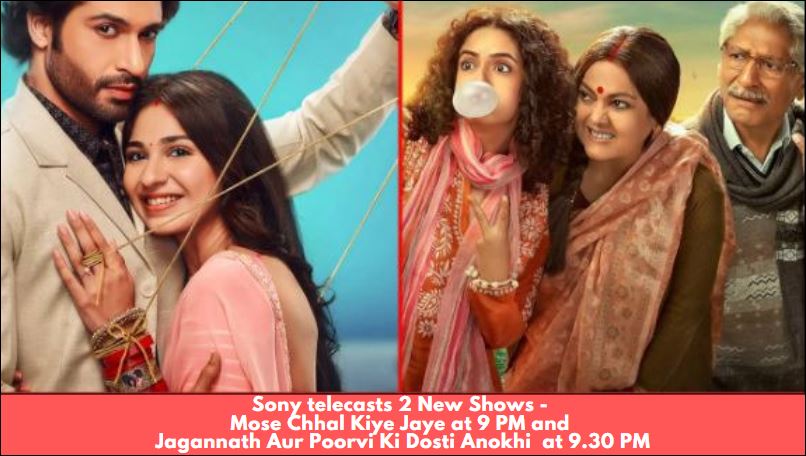 Sony Television always approaches with those kinds of shows that would interest its audience. The channel also ensures to keep its shows continuing for a few months, and not more than that, keeping in mind their audience. This time Sony is telecasting two of its new shows which are different from each other – one “Mose Chhal Kiye Jaye” at 9 PM and “Jagannath Aur Poorvi Ki Dosti Anokhi” at 9.30 PM.

Let’s have a quick look at two of Sony’s shows!

Mose Chhal Kiye Jaye is basically a family drama that Sony has started off on February 7, 2022. Under the Shashi Sumeet Productions, the main leads of this show are Vijayendra Kumeria as Armaan Oberoi and Vidhi Pandya as Saumya.

Mose Chal Kiye Jaye soap exhibits a girl named Saumya who aims to become a writer and get a chance to work in the TV industry as a writer. She dreams to become a successful writer. On the other hand, is the best TV serial producer, Armaan Oberoi who sees women as weak in society, be it his mother or to-be wife. Before Saumya plans to come to Mumbai to work under Armaan’s production house, he decided to drop the idea of her auditioning for the writer position. He tells his employee to book a return ticket for Indore, her hometown.

In the meanwhile, Saumya gets a proposal from Armaan Oberoi. She too decides to say yes with a promise from him that he will allow her to achieve her dream after marriage. He says yes to her, but says in his mind that if she will have time in hand after a whole day’s work, she can do it. Unfortunately, his plan is to cheat his wife as the reality for her will be different. Well, the audience has to see what difficulties Saumya will be facing and how she can achieve her dream, managing her married life.

The male lead character Armaan Oberoi, the producer of a TV Serial in MCKJ is played by actor Vijayendra Kumeria. He was last seen in Star Plus’s Aapki Nazron Ne Samja and is much-loved by the viewers. The female lead character Saumya is played by Vidhi Pandya who was last seen in Bigg Boss 15. Both Vijayendra and Vidhi have earlier worked in Colors’ Udaan.

The new show Jagannath Aur Poorvi Ki Dosti Anokhi is a comedy, drama on Sony Entertainment that telecasts at 9.30 PM from February 7, 2022. This show is produced by Katha Kottage Productions. The main leads include Rajendra Gupta, Sushmita Mukherjee, and Ismeet Kohli.

Dosti Anokhi showcases an old couple Jagannath Mishra and his wife Kusum Mishra, lovingly called Baby stay alone in Mathura in their home. Their sons and daughter-in-laws left their parents alone and moved out for years. Still, every year mother Kusum waits for their arrival. One fine day. The 72-year-old Jagannath saves teenager Poorvi’s life who jumped into the river and brings her to his home. Audiences are liking the serial already as they will see the quirky friendship between Jagannath and Purvi, how it evolves.

The male lead of JAPKDA covers Rajendra Gupta as – Jagannath Mishra, and female leads include Susmita Mukherjee as – Baby Mishra, and Ismeet Kohli as – Poorvi Singh.