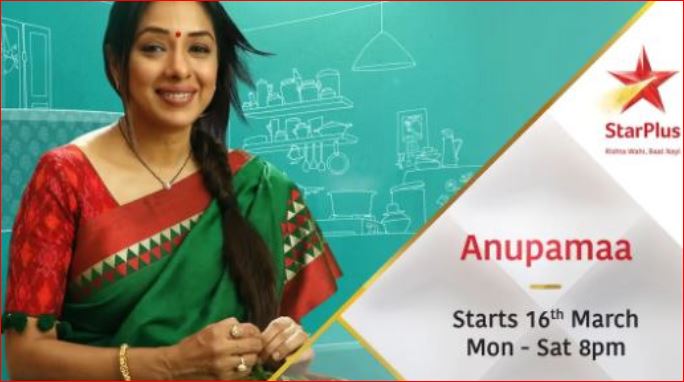 Star Plus is geared up with its new show with a fresh storyline named Anupama. This serial is produced by Rajan Shahi under the banner of the Director’s Kut Productions. Anupama telecasts from March 16, every Monday-Friday at 9 pm. The main leads of this show are Rupali Ganguly and Sudhanshu Pandey.

The fiction show Anupama is based on Star Pravah’s Marathi serial named Aai Kuthe Kay Karte. Also, ‘Anupamaa’ is the official Hindi remake of the Bengali show “Sreemoyee”. This is a story of a Gujarati lady [Anupama] who has dedicated her life for her husband and children and family but she doesn’t get valued for it. Hardly anyone in the family praises her for the dedication towards them; how she does everything for them, yet they aren’t content. She is just underrated because of her simple behavior.

As Anupama is unaware of the modern world, her husband and her daughter and sons ignore her commitment to the family. Though Anupama is a doting mother and wife, nevertheless her husband and daughter take her for granted and seemed to be embarrassed as she does not know to speak the English language and is unable to present herself socially.

There has never been nor there will be, anything quite so special as the love between the mother and son. Sometimes( #manytimes )we take our mom's for granted unknowingly but they always care without any expectations. These are few candid shots of me when i was just casted like literally 20 mins before this shot… And ill be honest i was shivering… 🙈🙈 Can't thank enough @rajan.shahi.543 Sir for seeing the dedicated actor in me and believing in me as your paritosh.. i will always love you for this… #alwaysandforever @directorskutproduction Thankyou @reemstini casting me for this show & always breafing me so well about the charecter and always always calling me in a hurry last moment and making it happen just how #paanch happened 😜🤗🤗 #castinglady #love @ketswalawalkar you are such a support…i am glad you are there genuinely thankyou for making comfortable as and when i was the new bee and didn't know where to go , what to do like when i was #blah 😜🙈🤣🤣 #Thankyou My father @sudanshu_pandey What a man so humble … Gives me all the more reason to love you as my father in the show… @paras_kalnawat my sister loves you and so do i 🤣🤣 @muskanbamne #adorablesister And last but not the least…. WATCH ME SHARING THIS BEAUTIFUL BOND WITH A FABULOUS PERSON AND ACTOR @rupaliganguly ma'am ONLY @starplus, ANUPAMAA….. FROM 16th MARCH at 9pm. 10 days to go….. #countdownbegins

Rupali Ganguly plays the main lead in Anupama as she plays the role of a wife, mother, daughter, and daughter-in-law. Her character’s name is Anupama. She was last seen in Sarabhai vs Sarabhai S2 on Hotstar.

Sudhanshu Pandey who was last seen in Jhansi Ki Rani on Zee TV will be the male lead Anoop, playing the role of husband, father, son in Anupama show.

Aashish Mehrotra plays the elder son, Paritosh (Toshu) of Anupama and Anoop. He was last seen in Dehleez and Adaalat.

Paras Kalnawat who was last seen in Meri Durga and Mariam Khan – Reporting Live, has been roped in to play the younger son’s role Samar for Anupama and Anoop in this show. Samar is the one who supports her mom always and brings smiles on his mom’s face.

Anupamaa is on the way ……. #anupamaa @anupamaa.ki.kahani

The new show Anupama on Star Plus has replaced “Kahan Hum Kahan Tum” with a happy ending on March 13. Watch out for Anupama staring Rupali Ganguly and Sudhanshu Pandey at 9 pm, every Monday to Friday only on Star Plus and Hoststar! 🙂