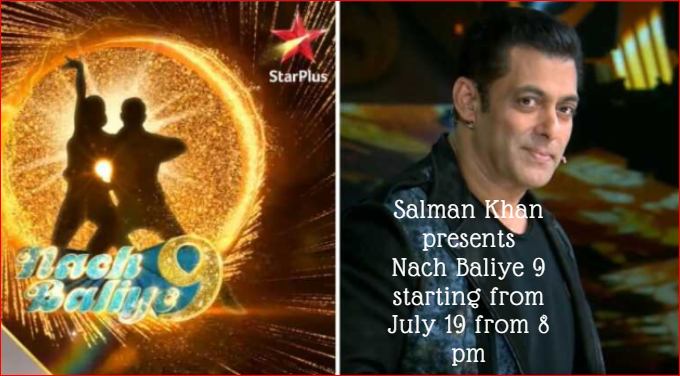 The most popular dance show of Star Plus, “Nach Baliye” is back in action with its ninth season. This time Star Plus is launching the show on Friday, July 19 on a grand level. The well-known celebrity dance reality show, Nach Baliye will continue its journey in the weekends from July 20, every Saturday-Sunday, at 8 pm. Nach Baliye is produced by Salman Khan Productions and he might be seen on the launch day too.

The show is hosted by the host, anchor and actor Manish Paul along with Salman Khan on the first day. For the next episodes, Manish Paul is accompanied by Waluscha D’souza as hosts on NB9. In season 9, the audiences will get to see feature couple as well as reunited exes, and it would be damn exciting to watch how the twelve jodis perform on stage as a couple. Television’s celebrity couple will launch the 12 couples on Nach Baliye 9. Fans and viewers are curious which celebrities are going to participate in this season.

Let’s have a quick look at the top couples of Nach Baliye Season 9!

Urvashi Dholakia, who played the role of Komolika from Kasauti Zindagii Kay is set to shake a leg with actor Anuj Sachdeva, who was her ex-beau. Though they both never confirmed their relationship, in 2011, they were rumored to have got together. The ex-couple will have a dance sequence on the opening episode.

Vishal Aditya Singh and ex-flame Madhurima Tuli are performing as a couple on the Nach Baliye 9. The two met on the sets of Chandrakanta – Ek Mayavi Prem Gaatha in 2017 and fell in love. They finally ended their on-again-off-again relationship in October 2018.

Rochelle Rao and Keith Sequeira appeared last on Bigg Boss 9 and The Kapil Sharma Show. The couple got married in March 2018. Rochelle, a model and an anchor, and Keith, an actor, former model, and VJ, are excited to win the hearts of judges in Nach Baliye 9.

TV actress Anita Hassanandani along with her businessman husband Rohit Reddy are showcasing their dancing styles on Nach Baliye this season. Anita who is seen in Naagin 3 and Yeh Hai Mohabbatein, will dance for the first time with her real-life hubby Rohit on-screen and their adorable chemistry will surely fetch some brownie points from the judges.

Television actress Shraddha Arya who is currently seen playing the role of Preeta in Ekta Kapoor’s Kundali Bhagya is joining Nach Baliye with Alam Makkar, who is a businessman from Jalandhar.

Wrestler Babita Phogat is making her entry into this dance reality show with her international-level wrestler husband Pawan Singh Kumar. The couple who got married in 2016, will be displaying their dances on stage for the very first time. Babita Phogat won India’s gold medal for wrestling at the 2014 Commonwealth Games and also won Arjuna Awards.

Prince and Yuvika who were last seen in Bigg Boss 9, are going to turn the table on Nach Baliye show. Both got married in October last year. Prince has been one of the mentors of Roadies series.

Shantanu Maheshwari and his rumored partner Nityaami Shirke are all set to give the other contestants a very tough competition. Shantanu, a choreographer, a trained dancer, actor, and a host, has been part of Jhalak Dikhhla Jaa 9 and Khatron Ke Khiladi 8. He also appeared on season 2 of an international reality show, World of Dance. It would be great to see this couple on Nach Baliye 9.

Dancer and actor, Faisal Khan who is 21 years, is joining his model girlfriend Muskaan Kataria on the dance floor on Nach Baliye 9. As per the reports, both met at an event in Jodhpur in 2018. Faisal has won Jhalak Dhikhhla Jaa in 2015.

TV actor Sourabh Raj Jain and his wife Riddhima are a part of Nach Baliye 9. The actor and model Sourabh is best known for playing Krishna in the Star Plus’ Mahabharat.

Bigg Boss 3 winner Vindu Dara Singh is back on the reality television along with his wife Dina Umarova who is a trained dancer. The couple earlier partook in Power Couple together.

TV actor Aly Goni will be seen on Nach Baliye 9 with his ex-girlfriend Natasha Stankovic. Their relationship came to the picture when Natasa was locked inside the Bigg Boss 8 house. Though they had never spoken openly regarding their relationship, it was known to be an open secret in the industry. They have been good friends, even after partying ways. Aly Goni was earlier in Yeh Hai Mohabbatein and also participated in Khatron Ki Khiladi 9.

The Eliminated Contestants till 1st September include:

Nach Baliye Season 9 has approached with a major twist and turn in their current concept. They feature couples who are married or in a relationship. It would be thrilling to watch the new season of Nach Baliye 9 on Star Plus, every Saturday-Sunday, from 8 pm onward. You can see the latest episodes of Nach Baliye show on Hotstar app. 🙂