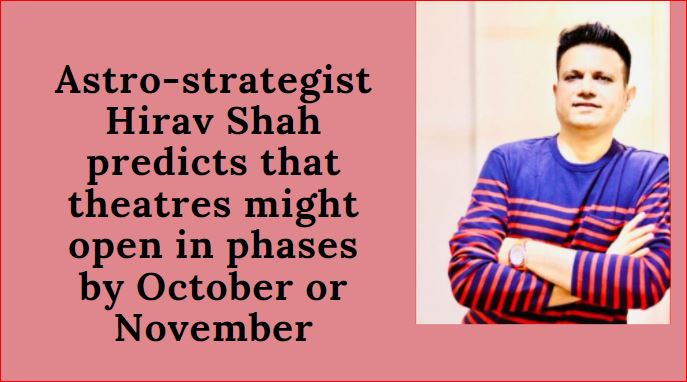 Astro-strategist Hirav Shah conveys that one phase of theatres will mostly open in October-November, the second phase will open in February, and the third phase will open after April. Read here to know more!

In the last couple of weeks, the Government of different states has eased down the lockdown restrictions in order to revive an ailing economy. While most businesses are operating with minimal staff and under timings issued by the Government, cinema theatres continue to remain shut.

Hirav Shah, India’s leading Astro-strategist, has closely observed industry trends for years and has been consulted by several eminent personalities from the movie business on various issues concerning the industry in the past. Apart from Indian celebrities, Shah has been a consultant to globally renowned names across twenty countries. As he keeps a tab on every major development in the entertainment industry, he has been aware of the way theatre owners and other stakeholders have suffered. While the situation is grim, he predicts there is light at the end of the tunnel.

If you are planning to make it big in the 𝐄𝐧𝐭𝐞𝐫𝐭𝐚𝐢𝐧𝐦𝐞𝐧𝐭 𝐈𝐧𝐝𝐮𝐬𝐭𝐫𝐲, here's my calendar for the month of Sept that can help you.

Do tag your friends from the #Entertainment world. #Astrology #Bollywood #Fashion pic.twitter.com/huzpVOiF4Y

“It is unfortunate that theatres are allowed to be operational in India yet but I am sure they have their own concerns. There are three important periods which are crucial for the theatre exhibition business. One is October – November when theatres are expected to start opening up, the second phase will be in February when things will improve and the third phase will be after April. After this last phase, things will become fully normal and theatres will have audiences coming in hordes like before. The makers of Sooryavanshi and ‘83 are already planning to release these films in theatres. Big, event films like these will help tremendously in restarting the theatre business”, Hirav says.

During the lockdown, OTT platforms started acquiring content, including several films that were earlier aiming for a theatrical release and releasing them one after another. That made a lot of people believe that digital streaming platforms would, perhaps, replace cinema theatres.

Commenting on the same, Hirav says, “Theatres will never go out of fashion. OTT platforms are doing very well and have given a large number of opportunities to many talented actors, technicians, and filmmakers. I think theatres, OTT platforms, television, radio, and all kind of mediums will continue to co-exist with each other. As they say, variety is the spice of life and the presence of all these platforms has ensured the same for the audience.”

Hirav Shah has been associated with a bunch of big Bollywood films that are expected to hit the screens early next year as an Astro-strategist. Several prominent people from the industry have consulted him on numerous occasions on the release date and other factors related to their films. And, his advice has always proved to be beneficial for them. His advice, thus, is all the more important now as the film industry is grappling with a never-seen-before adverse situation. Recently, there were news reports which stated that open-air theatres will be allowed to operate from September 21.

“I think it is a good step which would eventually result in regular theatres re-opening. I know theatre owners are getting restless but I would like to assure them that this phase would be over in due course of time. Going to a theatre to watch films is not just a habit but a cultural tradition with the people of our country. Once the vaccine arrives and things start getting normal, the audience will come back in large numbers. Theatres will be back with a bang. I am extremely sure of that”, Hirav says on a positive note.