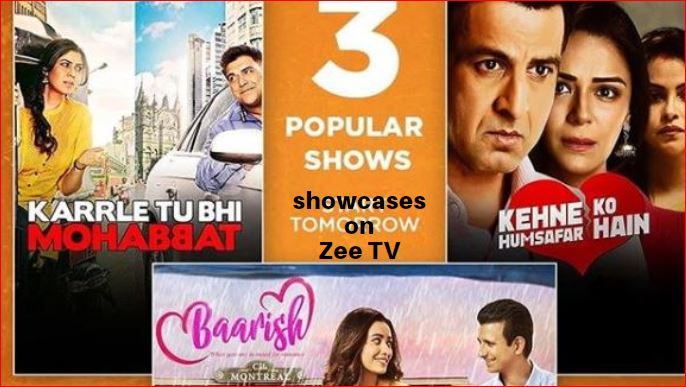 In the wake of the COVID-19 pandemic with a standstill across the world, the television industry has stopped functioning. Keeping in mind the safety of the cast and crew, the shooting of TV shows has come to a halt. Zee TV is telecasting its ongoing shows’ previous episodes from March 23. At the same time, Zee channel has approached with some of the popular digital shows from Zee5 to keep its audiences engaged that started from March 25.

Karrle Tu Bhi Mohabbat is a romantic series starring Ram Kapoor (playing the role of Ram Kapoor) and Sakshi Tanwar (playing the character of Tripurasundari Nagrajan). While recovering from his alcohol addiction, superstar Karan Khanna takes a detoxification trip to Mahabaleshwar with his counselor Tripurasundar. Further, the story also shows how gradually Karan falls in love with Tipsy or Tanpura as he fondly says her, and so as she, and how they try hard to express their love to each other. There is also drama happening where Karan’s estranged daughter cancels her wedding and his first wife, Radhika Awasthi (played by Swetha Kawatra) blames Karan. The three seasons have been cut short and shown in a few of the specific episodes.

The Monsoon Baarishh arrives early poetically.. you can watch this simple tv series during this #qurantime #weekend @altbalaji #baarishwebseries #altbalajioriginal #streamingnow #ektakapoor A very simple story to bingewatch and relax….

The Baarish series revolves around a Gujarati businessman Anuj (played by Sharman Joshi) and a Marathi girl Gauravi (played by Asha Negi) who are two complete strangers hailing from completely different backgrounds. Anuj owns his own business “Mehta Jewelers” where he gives respect to his employees as he considers them as his own family. On the other hand, Gauravi works in Mehta Jewelers. Anuj and Gauravi come close to each other at an exhibition where he saves her from a conspiracy planned by his brother Aniket (played by Vikram Singh Chauhan). Thus, such circumstances lead to the families of Anuj and Gauravi getting married, and also Anuj found Gauravi as a nice girl with a pure heart.

The storyline revolves around a caring wife Poonam (played by Gurdeep Kohli), her husband Rohit Mehra (played by Ronit Roy) who is a chartered accountant and an interior designer Ananya Sharma (played by Mona Singh). Poonam and Rohit have two loving daughters, Bani (Pooja Banerjee) and Nikki (Palak Jain). From the outside, it looks a happy family, but behind lies the actual truth; Rohit is in love with Ananya and when the secret finally comes out, it comes as a shock to everyone involved and Rohit’s children are heart-broken. The story shows that Rohit divorces Poonam and decides to marry Ananya, but then also Rohit and Ananya’s relationship doesn’t go smoothly when she decides to leave Rohit to move to Dubai so that Rohit can fix his situation. Then again Rohit goes to Dubai and tries to convince Ananya to return back to India with him. It will be interesting to see for the audience how Ananya deals with Bani and Nikki, and Poonam, and how Rohit balances between Ananya, his wife, and his children Bani and Nikki.

NEW SHOW STARTS tonight!! A beautiful urban mature tale of love that gets divided between choices, responsibilities and personal need! When a man at 40 decides to change the course of his life, is it mid life crisis or a realisation of what he truly wants? #kehnekohumsafarhain will raise questions tha sometimes don’t have answers! Mon-Fri 10pm ET | 7pm ET only on #ZEEAmericas @rohitroy500 #monasingh @gurdippunjj

Watch out every Monday to Friday, the three digital shows: Karrle Tu Bhi Mohabbat, Baarish, and Kehne Ko Humsafar Hai only on Zee TV from 9 pm to 11 pm. Viewers can also watch on all the episodes of the 3 episodes on the AltBalaji app.