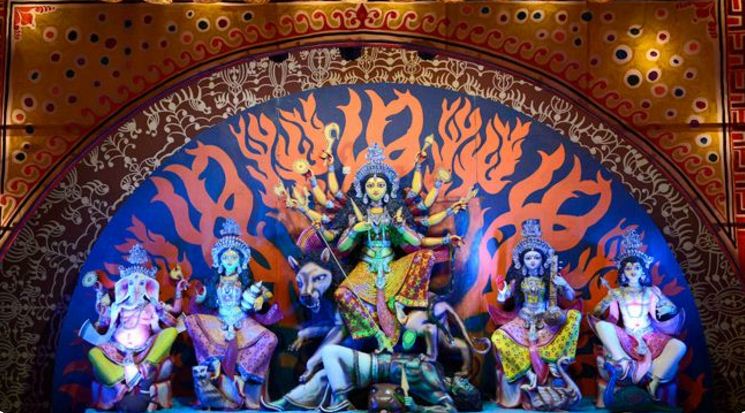 Durga Puja is the most significant festival of Bengalis, including Odiyas and Biharis. Tgis festival is celebrated in honor of Goddess Durga during the Navratri occasion. This year Navratri is a 10-day celebration, and Durga Puja begun from the 6th day continued till 11th day.

As per the Hindu mythology, it is believed that Goddess Durga appeared from combined energy of all the Gods in the form of an incarnation of Shakti (heavenly feminine power) in order to demolish demon Mahishasura. As he was blessed that no man or God can defeat him, only Goddess Durga had the power in her hand to destroy him completely. Durga in Sanskrit signifies “the unfathomable”; she has the ultimate power. Preparations for this festival in making pandals begin two weeks ago. Kolkata gears up for this occasion, as everyone eagerly wait for Durga Puja to begin as they welcome Ma home.

Durga Puja with its Ideal Rituals

Just before Navratri starts, the idols of Goddess Durga are painted superbly, sans her eyes. On the day of Mahalaya, Goddess Durga is invited to come on Earth by doing rituals. Hence on this very day, Her eyes are drawn and painted by doing auspicious rituals described as Chokku Daan. While drawing the eyes on Goddess Durga’s idol, She descends towards the Earth to meet everyone. Even the idols of Lord Ganesh, Goddess Lakhsmi, and Goddess Saraswati are painted nicely in distinct colors.

On Panchami, the sixth day, Goddess Durga, along with Lord Ganesh, Goddess Lakhsmi, and Goddess Saraswati are bought to the pandal and placed inside it. The pandal is lit up with bright lights for 6 consecutive days. On Shashthi, the seventh day, a small banana plant known as Kola Bou is taken towards river for bath and worn in red-border sari in the early morning, and then placed back near idol of Goddess Durga. Further prayers are done by the purohit!

On Saptami, the seventh day, Maha-Ashtami, the eighth day, and Maha-Navami, the ninth day, ritualistic prayers and puja are offered to Goddesses and Lord, including morning and evening aarti. Aarti is also offered in the morning of Dashami, the tenth day. People who visit the pandal can offer aarti, and get Prasad. In the evening of Dashami, Visarjan is held where idols are immersed in river in majestic processions.

During Kolkata Durga Puja festival, food is the most important feature. People visiting Kolkata pandals can explore delectable varieties of Bengali cuisine. Apart from Kolkata, special-themed Bhog meals are offered to people at lunch and dinner time. Firstly Bhog is offered to Goddess Durga, and then they are distributed afterwards to the devotees. Many food stalls are set up near the pandals so that people can relish delicious dishes.

Many cultural activities are exhibited in the evening for four days, including singing, dancing, theatre plays, traditional acts, modern dances with band troupes. Children and young girls too showcase Bengali and Bollywood dances.

In the morning, after puja drawing and fancy-dress competition are held for children, followed by housie and other games enjoyed by other people sitting in the pandal.

Wishing everyone A Very Happy Durga Puja! Enjoy the Durga Puja festival with your family and friends to the fullest! 🙂