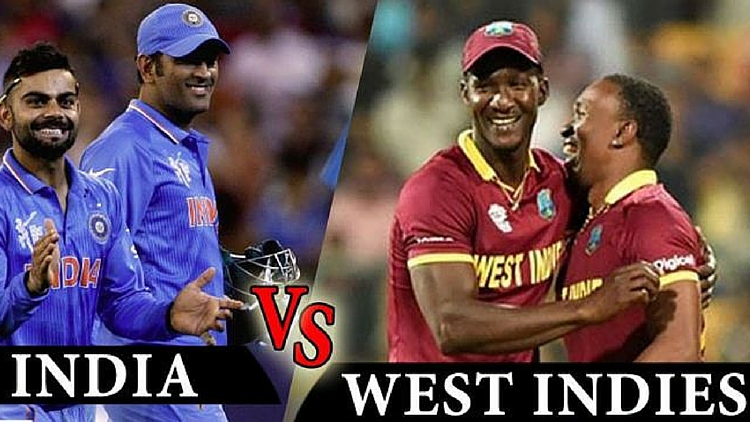 Last Sunday India won the match against Australia, beating them by 6 wickets to enter the semi finals. Virat Kohli, the terminator scored 82 runs in 51 balls. It was a good partnership between Virat and Dhoni. The whole audience was cheering in excitement on India’s win.

The no-holds barred battle between 2007-winners India and 2012 title-winners West Indies is anticipated to showcase their proficiencies by the ability of players to handle pressure in front of huge audience at the venue. Five years ago host India conquered their 2nd ODI World Cup!

Both India and West Indies collide with each other today after getting beaten in Super 10 Stage once each; and the team which grasps its opportunity is supposed to be victorious. Nevertheless, India will have an upper edge with its strong team who will certainly stand up to the expectation of the captain and viewers too.

What to expect: Weather in Mumbai will be comparatively fine.

Virat Kohli’s inspiring and amazing batting form will be up against the forceful batting of Chris Gayle. This match promises to be a hard-core battle in the second Semi-final match tonight. Kohli being the terminator and galvanizing factor will exhibit his best batting as he has always helped in India’s score progress. With his magnificent batting display consistently in the slight shaky top-order, Windies will be cautious of this brilliant batsman, besides the reliable skipper MS Dhoni.

India will try to win the toss and opt for batting, putting a big score. The top batting order Shikhar Dhawan, Rohit Sharma, Suresh Raina, Virat Kohli, and MS Dhoni will try to build up superb runs this time. Dhoni is anticipating that the top 3 players will be producing their best shots. It would be also exciting to watch right-handed batsman R Ashwin against left-handed Gayle. Ashwin being right-arm off break bowler is aiming to smash the batsmen of WI thoroughly. Even the accuracy of young Jasprit Bumrah and wily Ashish Nehra’s ability to swing ball could be the vital factor in pressurizing the WI team by taking quick wickets. Every Indian player needs to contribute in today’s match, not depending on Kohli and Dhoni only.

Yuvraj who got injured with ankle injury while batting in the last match against Australia, is ruled out of World T20 semi-final clash against WI. Manish Pandey will replace Yuvraj in the team.

Carribean batting charmers Chris Gayle and other batsmen like Dwayne Bravo, Samuel Badree, Andre Russell, Darren Sammy, Sulieman Benn, and Carlos Brathwaite are targeting to produce great runs to take their score card higher. Though they have lost against Afghanistan, still they will fight back like fierce tigers in semis. Even the bowling line-up is pretty much steady of West Indies. In place of Andre Fletcher who was ruled out because of an injury, WI has been added with right-hand batsman and part-time bowler Lendl Simmons who will bolster his team to the fullest.

India and WI both played 3 matches, out of which WI won 2 and India won 1 match. Well, India now takes on WI in second semi-final of World T20 cricket tournament.

Today ICC World Twenty20 second semi-final “India Vs West Indies” will surely be a high-pressure game. If India wins the toss, they must choose to bat first in order to put a huge score so that it wouldn’t be easy for WI to chase it.

If WI wins the toss and decides to bat first, then Indian players need to tighten them from scoring high, so that in the second half they can bat strongly to overcome their score, and acquire their place for Sunday finals.

Watch the Live match on Star Sports TV channel or HotStar. Click on this link to watch the whole match at 7 PM today. ( http://www.hotstar.com/)

India may have an advantage on Wankhede Stadium, and give their excellent performance to enter Finals! Let the electrifying match between India and West Indies begin at 7 PM! Cheers and Best of Luck to both teams, and May the better team win tonight! 🙂