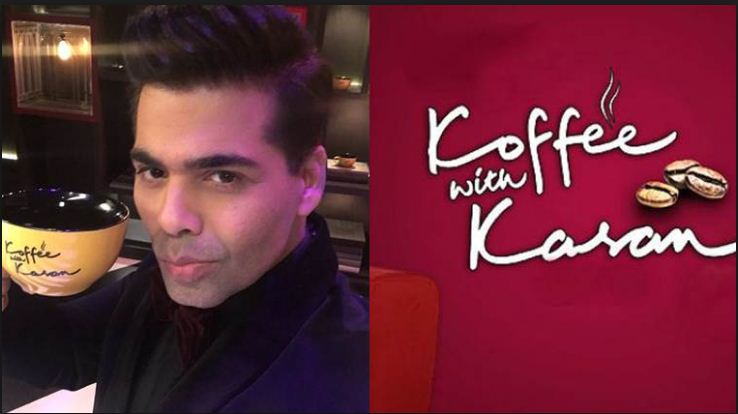 The four seasons of Koffee with Karan has always been the talk of the town, and Karan Johar has yet again returned back with his fifth season on Star World and Star World HD from Sunday, 6th November. Director Karan Johar has brought in brand new season with fresh guest celebrities every Sunday, 9 PM. His chat show made a fabulous start with guests having a great conversation with the host. 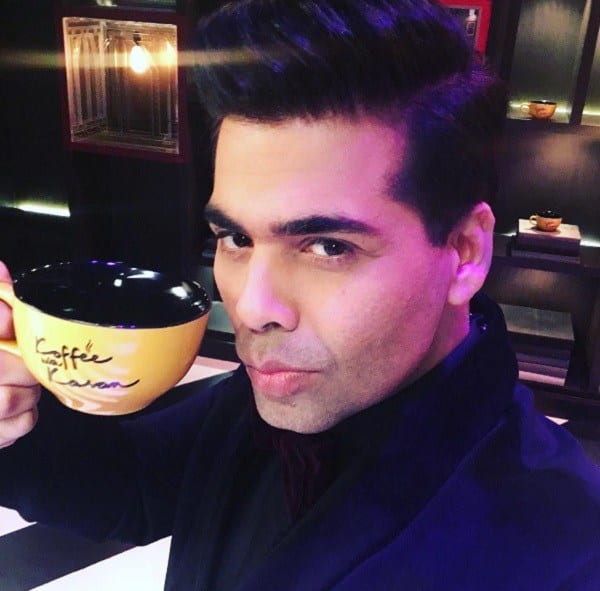 Koffee with Karan is a popular talk show that audiences love to watch every single episode. It is more entertaining show with Karan’s invited guests who are well-known Bollywood celebrities at their candid best. Star World’s one of the excellent shows- Koffee with Karan approaches with Bollywood stars as they encounter Karan Johar’s humor and witty questions, engaging in fun revelations, non-secretive confessions and carefree conversations. Guests on Koffee with Karan Season 5

Shah Rukh Khan appeared in the first episode with his Dear Zindagi co-star Alia Bhatt. Shah Rukh was missed in the last season of Koffee with Karan, but SRK won the big Koffee Hamper. The chat and conversations between them went off in fun, excited manner as Karan added new surprises on his show. The second guest will be Akshay Kumar and Twinkle Khanna who are appearing on 13th November. Akshay and Twinkle are making on a debut as a couple on Karan’s show and it would be great to see them both together. The trailer of this episode seemed so exciting and much-awaited where Twinkle will ask questions to Karan and answer his questions in a sarcastic tone; like her comment on her hubby’s crotch and inches height has already left everyone enthused with anticipation. In Karan’s words, he was more scared of Twinkle and any of his other guests! Will Akshay be allowed to speak on the show- will have to see! Bollywood’s young boys Varun Dhawan and Arjun Kapoor are the most happening on the set of Koffee with Karan show. Their stylish gay act would just steal the show magnificently. Varun and Arjun’s relationship status as will be confirmed on this show is brother from another mother. They have a great rapo and a terrific sense of humor that will make Karan and the audience laugh out loud.

This combination pair is eagerly awaited on Karan’s show. Both Ranveer Singh and Ranbir Kapoor share a good equation like buddies. One needs to see this episode what questions Karan Johar will shoot at them! 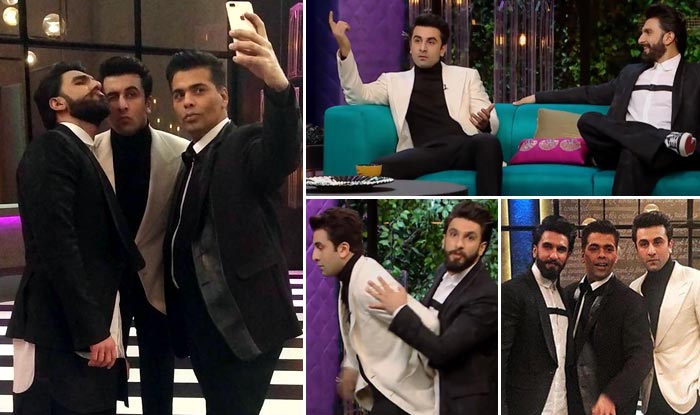 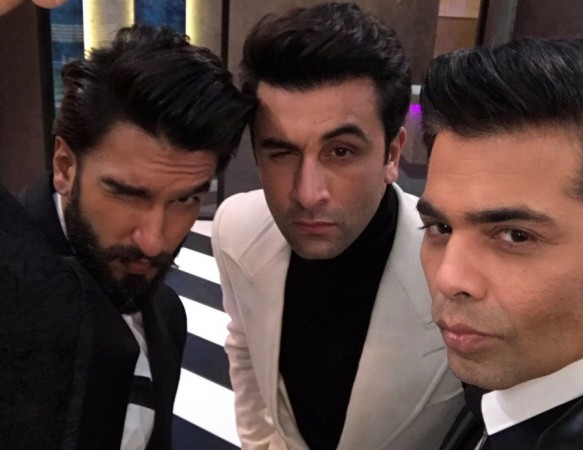 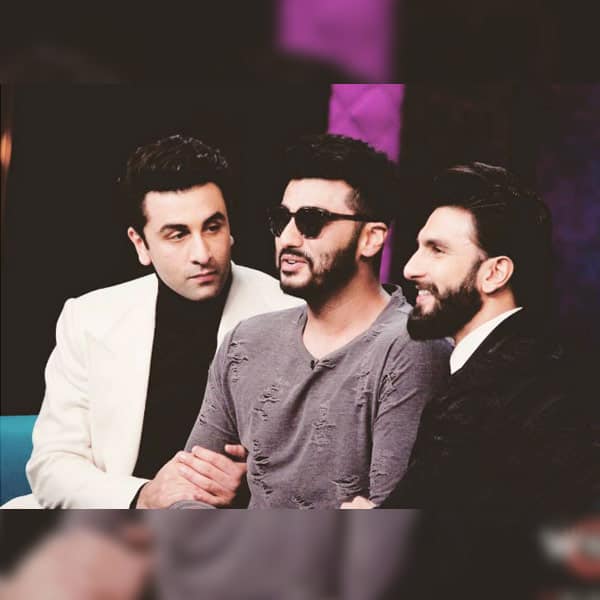 Arjun Kapoor made a cameo (Bollywoodlife.com)

Parineeti Chopra and Aditya Roy Kapoor will be seen sipping coffee with Karan this season. Both did film together titled Daawat-E-Ishq, and audience will again love to see this pair on-screen on Koffee with Karan. 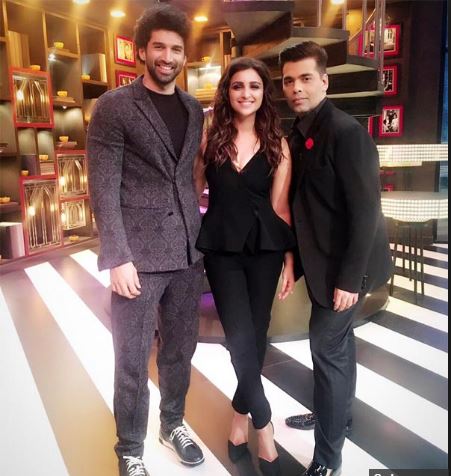 This time Karan Johar will be having three brothers- Salman, along with Arbaaz and Sohail Khan in his couch together. This episode would be certainly a laugh riot to watch for, as these three bros would have almost roasted Karan. Karan tweeted: “Thanks so much Salman for coming on our 100th episode of #koffeewithkaran!” Its’ Koffee century! At Koffee with Karan Shoot, Salman, Karan, Sohal and Arbaaz (The Indian Express)

Now actor Aamir Khan too will sip coffee on Karan’s couch on Koffee with Karan show. He will be accompanied with his Dangal girls, Sanya Malhotra and Fatima Sana Shaikh who will be a significant part of that episode. This will a way not only for their movie promotion, but also come up with revelations and gossips with Karan. The gift hamper presented by Karan to them would be something different, as it will leave your mouth watering. Yes, Aamir Kahn will be approaching with his brand new look on Karan’s set. It would be really fun to see Aamir with pretty Dangal girls having great time on Koffee with Karan. 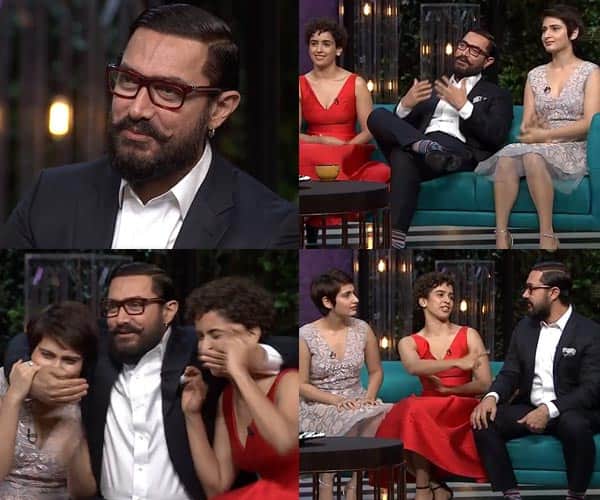 Glamour beauties Anushka Sharma and Katrina Kaif will share the Koffee with Karan couch as they’ll be constantly talking and having fun with the host Karan Johar. Girls will have a gala time together, and also accompanying them will be Arjun Kapoor. It would be the third time Arjun Kapoor will be visiting Koffee with Karan show. Katrina and Anushka’s non-stop funny naughtiness makes Karan tell those girls as “crazy”.

Koffee with Karan will welcome yet another sweet couple- Shahid Kapoor and Mira Rajput. For the first time Shahid’s wife Mira will debut in television with hubby. The amazing couple will be seen spilling beans about each other on Karan’s chat show. It would be a completely fun episode where Shahid and Mira will be seen pulling each other’s legs, yet showering love on each other in a mussy way. The chat show of Koffee with Karan in the new year will see Jacqueline Fernandez and Siddharth Malhotra who will make the first episode of 2017 even more funny and super-interesting. Both will talk on the conjecture that is flying around their alleged affair, after Karan asked about their current status. They’ll keep their confessions light yet entertaining.

Both these dynamic actresses will be seen on Koffee with Karan Season 5 with their stylish looks. They are the fresh pair who always speaks their heart out. Kareena and Sonam will be seen together in director Shashank Ghosh’s upcoming movie Veera Di Wedding. 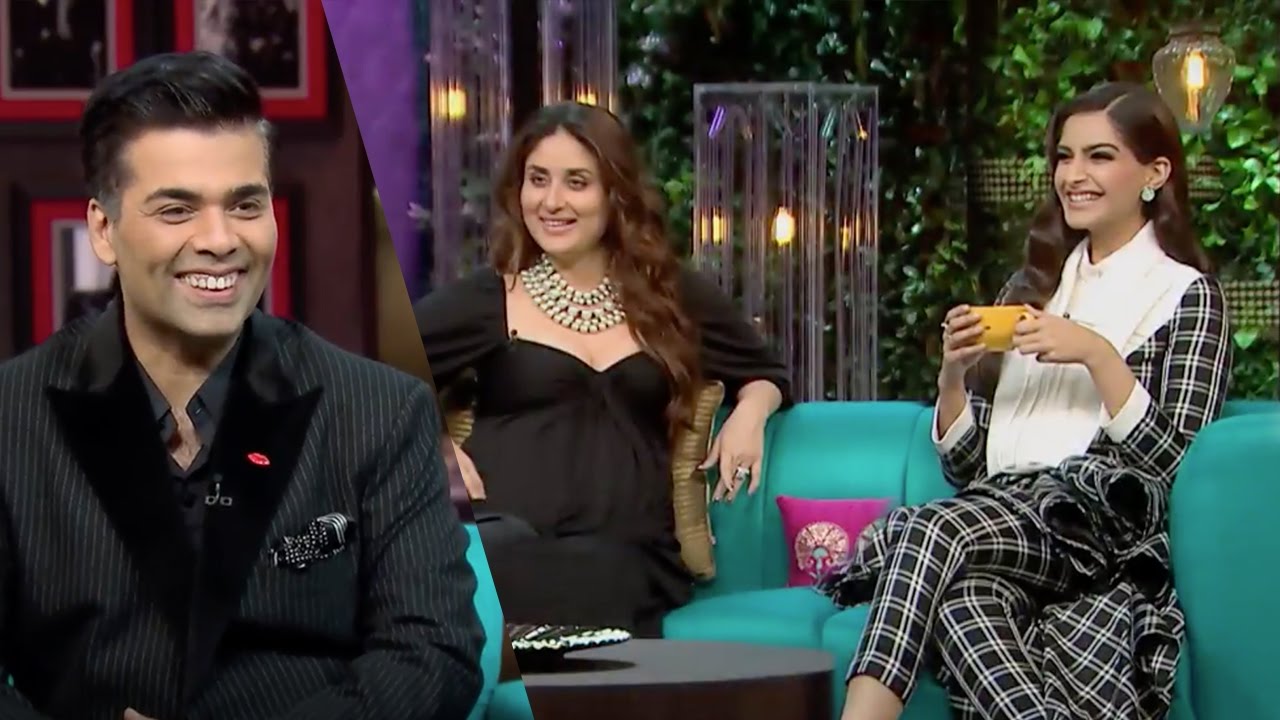 Promo Shots of Koffee with Karan

Karan Johar and His Yellow Mug for Season 5 (DNA)

Previous Seasons of Koffee with Karan