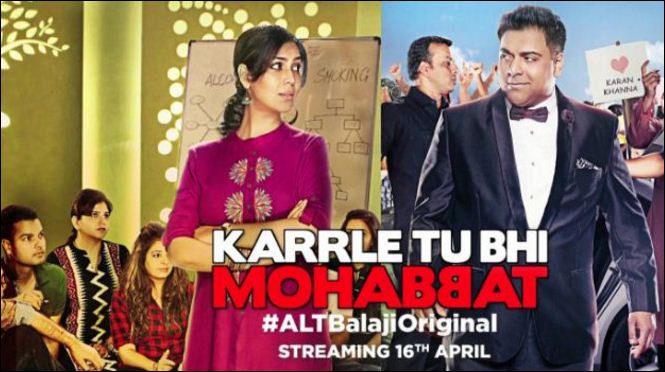 The popular television actors Ram Kapoor and Sakshi Tanwar are making a comeback together and mesmerize their fans with their amazing chemistry. Instead of appearing on television, Ekta Kapoor has decided to arrive with her new digital series “Karrle Tu Bhi Mohabbat” which will have only 15 episodes starting from 16th April, Sunday. Known as the best and the all-time favorite television couple, Ram Kapoor and Sakshi Tanwar are set to enter into the digital zone with their remarkable Karrle Tu Bhi Mohabbat, conveying back fond memories of Bade Achhe Lagte Hain [2011-2014]. This web series is produced by ALTBalaji and sponsored by Ekta Kapoor.

The official poster, as well as trailer of Karrle Tu Bhi Mohabbat, has been released by ALTBalajiOriginal, and viewers love it. They are eagerly waiting for the lovable Jodi to hit the web screen together with their fun-filled, sizzling chemistry. The makers of this show tweeted, “The official trailer of Karrle Tu Bhi Mohabbat released, #ALTBalajiOriginal starring your favorite #SakshiTanwar and #RamKapoor! Are you excited?” It is an exciting moment for both Ram and Sakshi to share the screen space again and showcasing their magic on the fans and audience. On the release of the new web series’ glimpse, it is a key throwback for everyone who loved this on-screen couple on Bade Achhe Lagte Hain.

The 15-episode digital series is a mature love story that explores how two people of opposite nature gradually fall in love, though not liking each other at first.

The storyline of new web series Karrle Tu Bhi Mohabbat revolves around two main characters played by Ram Kapoor and Sakshi Tanwar. Ram Kapoor is playing the role of an actor Karan Khanna who is also an alcoholic star. He is having a hugely popular stardom and lots of fan following, yet he has the habit of drinking. Sakshi Tanwar, on the other hand, is a doctor Ms. Tripura Sundari Nagarajan of a Health Care, Addiction Center where she is assigned by her boss to ward off Karan’s bad habit of drinking. He enrolls himself in a de-addiction program under Tripura or Tipsy (nickname) who becomes his counselor.

In the beginning, they both literally hate each other and their habits. Karan is in no mood to get counseled under a doctor and makes a fuss. But Tipsy tries to convince him in every way to ward off his habit that may hamper his health too. With the passing time, they both grow a fondness towards each other with Karan making the first move. So you have to watch on Balaji’s new web channel how they both start loving each other. Thus, the series will bring forward a bright freshness with Sakshi-Ram’s ideal on-screen compatibility.

The trailer seems super-exciting where Ram Kapoor as a superstar and Sakshi Tanwar as a doctor exhibit amazing chemistry. Karan Khanna aka Ram Kapoor will be seen trying to get rid of alcohol under Ms. Nagarajan’s proper guidance, and progressively both become essential parts of each other’s lives. A carefree Karan Khanna makes an attempt to connect with Sakshi by breaking the ice but is unable to make it. In fact, Ms. Nagarajan scolds him in trying to enter her personal space. She tells, “Aap na yahaan pe Ram hai, na Romeo, na koi Raghav, na Devdas,” and Karan quickly responds, “Ab tak aapne mere sare filmein dekhe hain, fan ho?” Though Sakshi tries to control her anger, still Ram loves teasing her in a fun way. Tanvi Vyas plays the role of Sakshi’s sister in Karrle Tu Bhi Mohabbat as she is very thrilled about her role in this web series. The show is likely to showcase Shweta Kawatra who will play the ex-wife’s role of Karan Khanna.

The title song is taken from the movie Life In A Metro: