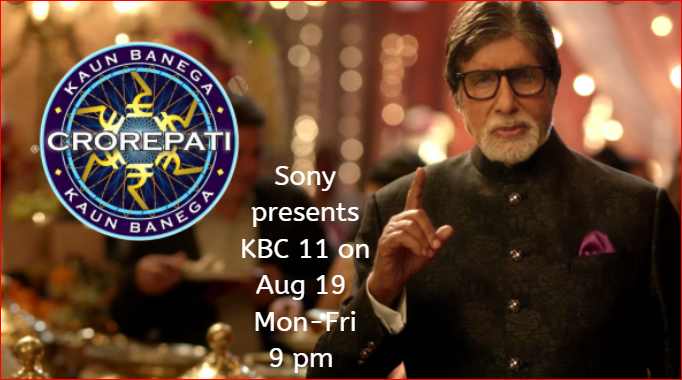 Sony Entertainment is approaching with its favorite game show titled Kaun Banega Crorepati in its 11th season. This time the theme for KBC 11 is “Adey Raho” which means ‘Keep standing’. The show is hosted by none other than Big B, Mr. Amitabh Bachchan, and the show is being telecast from August 19, Monday to Friday, from 9 pm onwards! KBC is directed by Arun Sheshkumar-Rahul Verma and produced by Siddharth Basu.

KAUN BANEGA CROREPATI 11 TO BE AIRED SOON Fans are eagerly waiting for the 11th season of the most watched Television quiz show in India ‘Kaun Banega Crorepati’. The host of the show, Bollywood Superstar Amitabh Bachchan will be back on TV and begin shooting from this month itself and the show will go on air next month. The registrations for the show already began in May and the participants are been locked in rapidly. Meanwhile, Big B is busy shooting for the movie Chehre opposite Emraan Hashmi and was last seen in the hugely successful film Badla starring Tapsee Pannu. He will also be seen with Ayushmann Khurrana in the comedy Gulabo Sitabo. Follow the link: https://www.indianfilmhistory.com/news-details/kaun-banega-crorepati-11-to-be-aired-soon . . . . . #amitabhbachana #KaunBanegaCrorepati11 #Chehre #EmraanHashmi #Badla #TapseePannu #AyushmannKhurrana #GulaboSitabo #amitabhbachchan #amitabh #amitabhbacchan #amitabhbachhan #amitji #amitabh_bachchan #amitabhbachchanfc

A post shared by IFH Amitabh Bachchan Fan Club (@ifhamitabhbachchanfanclub9) on Jul 3, 2019 at 1:06am PDT

Bollywood megastar Amitabh Bachchan is back on KBC in its 11th season which is his tenth outing as a KBC host. Except for the third season, he has hosted all its seasons. His aura and style have made him synonymous with KBC. He has been promoting the show for the last three weeks. Two teasers have already been released by Sony before which were conceptualized and directed by filmmaker Nitesh Tiwari. These videos showcased how individuals are criticized by their family and society people when they convey them that they are interested to take a different path. But when they manage to accomplish their dreams through elasticity and willpower, those criticism turns to gratitude. Big B shares the message in the end: “If you believe in something, stick to it!” [Vishwas hai to uspe khade raho, adey raho].

KBC 11 has returned back with few lifelines for the selected contestants sitting in the hot seat to move ahead in the questionnaire session.

Every Friday KBC will be hosting Karamveer, a special episode on real-life heroes, as Mr. Bachchan will be playing with them. Also, they would be felicitated for their heroic deeds and actions that have brought about a great change in the society with a noble dedication which has become an inspiration for many people. These special episodes have been bestowed to the inspirational Karamveers as they speak out for their extraordinary works and lives.

Well, the viewers can participate in KBC game show by sitting at their homes and playing on KBC Play Along on Sony LIV app. They can also simultaneously participate by answering the questions asked by Mr. Bachchan to the hot seat contestant. In fact, on every ad break, Big B asks a question with 4 options to the people at homes and the winner will get prize money. With the grab of Monday-Friday prizes, viewers can surely try to maintain their position on the leader-board so that they may get a chance to feature on the show in the finale week as a participant.

Kaun Banega Crorepati Season 11 is presented by Oppo. The co-sponsors of the show are IDFC First bank, LIC, Ceat, Cardekho.com, Asian Paints, Ultratech and Amity. KBC 11 time-slot might be from 9 to 10.30 pm! For the Sony viewers who watch daily soaps – Patiala Babes’ will telecast from August 19, from 8.30 pm to 9 pm, and ‘Tara From Satara’ from 10.30 pm to 11 pm. ‘Ladies Special’ has ended on August 16.

Watch out for the KBC 11th season with Amitabh Bachchan beginning from 19th August, every Monday to Friday at 9 pm only on Sony channel!